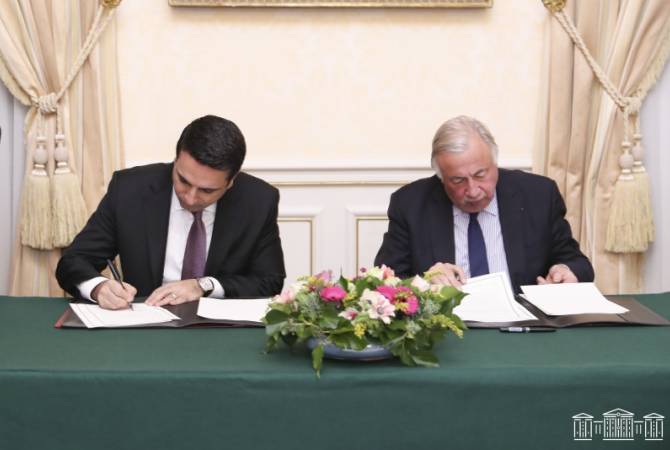 Alen Simonyan expressed his gratitude to Gerard Larcher for the invitation to participate in the Forum entitled “Armenia after one year”, reports the press service of the Parliament.

The President of the Senate of France thanked the Speaker of the Armenian Parliament for accepting the invitation, noting that they are closely following the situation in Armenia and are well aware of post-war developments.

The counterparts considered it remarkable that the Forum was held one year after the almost unanimous adoption of the resolution on the need for recognition of the Nagorno-Karabakh Republic on November 23, 2020 and after 20 years of adoption of the law recognizing the Armenian Genocide by France.

President Simonyan affirmed that these historic events are exceptional manifestations of solidarity towards Armenia and the Armenian people, and unique examples of unanimity in the internal political life of France. In this context, the Armenian side highly appreciated the adoption of the resolutions condemning the Azerbaijani aggression against Artsakh and the need for the recognition of the Republic of Nagorno-Karabakh by both chambers of the French Parliament, as well as the assistance humanitarian aid provided by the French State and various organisations.

The parties referred to the provocative and aggressive actions carried out by Azerbaijan on the border of Armenia, recording that Azerbaijan violates the trilateral declaration of November 9, 2020.

Presenting details on the post-war situation at the request of his colleague, Alen Simonyan underlined Armenia’s call on all international colleagues – to respond in a distinct and targeted manner to these actions seriously endangering the regional peace and security by the Azerbaijani side and to take practical measures to prevent theme and withdrawal of the Azerbaijani Armed Forces from the Republic of Armenia. The parties documented the importance of the process of peaceful settlement of the Nagorno-Karabakh conflict under the auspices and within the framework of the mandate of the OSCE Minsk Group. During the interview, attention was drawn to the urgent resolution of post-war humanitarian issues, including the need for the repatriation of all prisoners of war and civilian hostages.

The parties referred to the open fire in the direction of the Armenian positions located in the Norabak village section of Gegharkunik Marz from the Armenian-Azerbaijani border a few hours ago of the meeting, following which the military Suren Safaryan is dead. The parties viewed Azerbaijan’s aggressive actions as an attack on democracy as well.

The counterparts spoke about the remarkable functions of interparliamentary cooperation in the development of interstate relations, as well as the dynamics of the Franco-Armenian high-level political dialogue.

The meeting concluded with the signing of the Cooperation Agreement between the National Assembly of the Republic of Armenia and the Senate of the French Republic, which conceives multipolar cooperation for the benefit of existing friendship and solidarity. between the two countries.