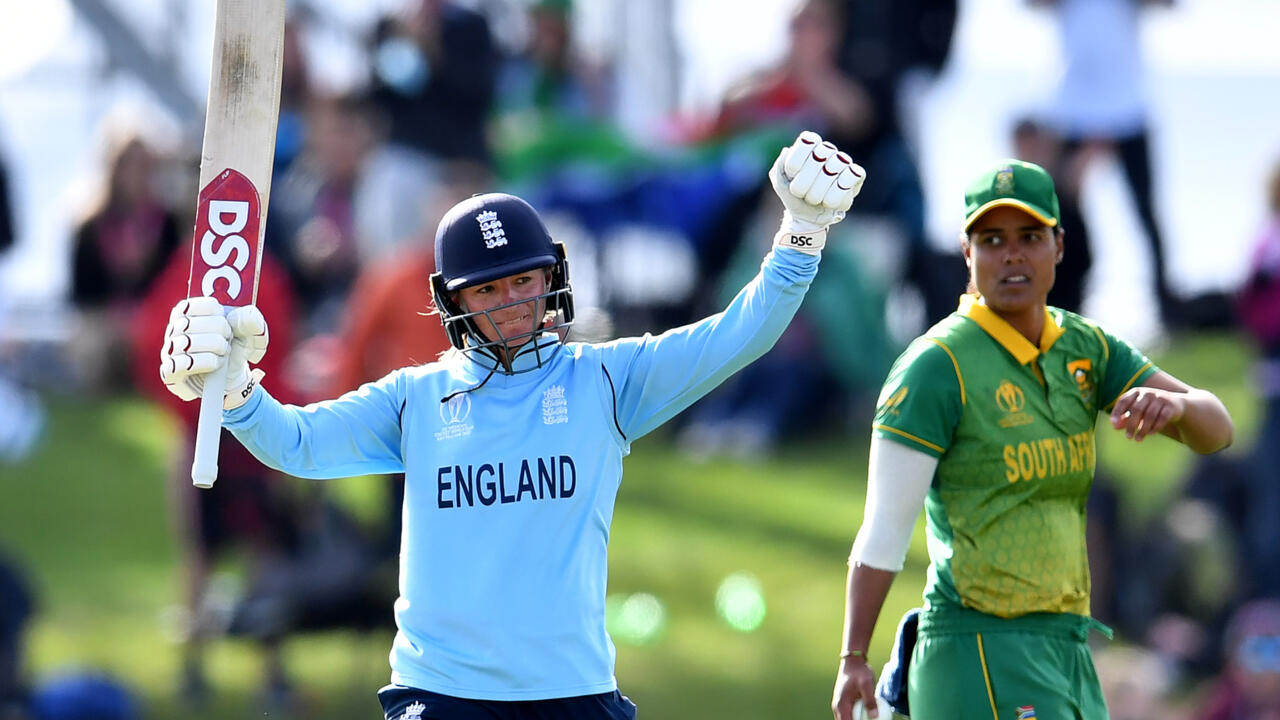 Christchurch (New Zealand) (AFP) – England continued their fairytale revival at the Women’s World Cup on Thursday when Danni Wyatt’s Century staged a 137-run semi-final against South Africa to set up a final showdown with Australia.

Wyatt’s remarkable 129, aided by five lost catches and backed by Sophia Dunkley’s 60, saw England post an imposing 293 for eight of their 50 overs at Hagley Oval in Christchurch.

Sophie Ecclestone then produced the tournament’s best bowling figures with six for 36 as South Africa fell for 156 in 38 overs.

Having been on the brink of elimination after losing their opening three matches, the defending champions have since won five in a row and will now face unbeaten Australia in Sunday’s final, also at Hagley Oval.

Australia qualified for the final with a landslide 157-point victory over the West Indies in Wellington on Wednesday.

“It was a complete performance from us today, which is what we were looking for,” said captain Heather Knight, who rated her team as “underdogs” against Australia.

“But we are all equal on game morning and what history is written for us if we can do that.”

Player of the Game Wyatt, who scored just 12 fours in her 129-of-125 deliveries — the tournament’s third-highest tally — said it was tough batting ground.

“I tried to capitalize on the width provided by their bowlers. The boundaries were pretty big,” she said.

“It was a weird wicket. We just said run well between the wickets and be positive.”

It was the second consecutive World Cup that England had beaten the Proteas in the semi-finals and chased South Africa’s last four hoodoos without either men’s or women’s team reaching a World Cup final. ODI or Twenty20.

They started well when they won the coin toss and put England down 77 for three, but fly-half Wyatt held on.

At 126 for four, Wyatt was joined by Dunkley and the pair went 116 for the fifth wicket plus six to set England up for a formidable aggregate.

Wyatt was eventually knocked out of bowling by Masabata Klaas, caught by Lizelle Lee who had let down the first chance offered by Wyatt when she was 22 years old.

Dunkley made his 60 of 72 deliveries and the innings were ended in style by Ecclestone’s quick shot 24 from 11 balls.

The all-rounder hit three straight fours in the final before being knocked down by Shabnim Ismail, who finished with the best South African figures of three for 46.

South Africa’s chase began in disastrous fashion when tournament top scorer Laura Wolvaardt was taken out without scoring in the second set and opening partner Lee called in the fourth set for two.

From eight for two, South Africa were in further trouble when captain Sune Luus went for 21, leaving them 44 for three in 12th and well behind the required run rate.

At the halfway point they were 95 for four with the increasing required run rate of 7.96 proving beyond them as the tournament’s top wicket taker, Ecclestone, came through the tail to take England in his sixth appearance in a World Cup final.

‘Novak Djokovic managed to set up his…’ says top analyst