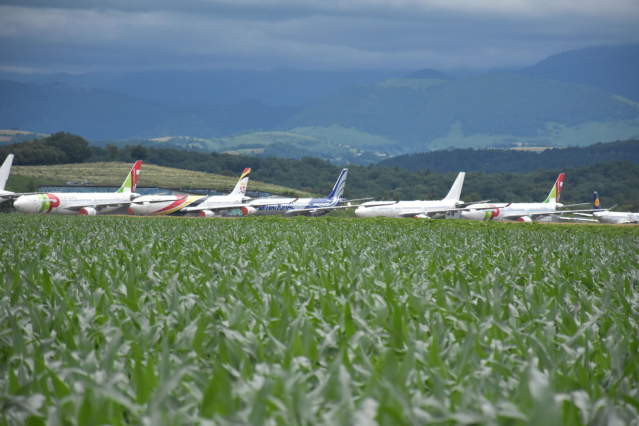 It’s not just the pandemic that has put the brakes on air travel – a growing concern about the environmental impact of flight is putting additional pressure on airlines.

As planes become more efficient and airlines insist they are doing all they can to reduce emissions pollution, attention turns to another environmental concern: what happens when are machines reaching the end of their useful life?

Until the early 2000s, few saw this as a problem. Old planes that could no longer be kept running were thrown away like used cars – either crushed and buried, or left to rust in giant ghostly junkyards.

In 2007, a French company was created to offer a solution to the problem and at the same time take advantage of a business opportunity.

A redundant aircraft may not be able to fly anymore, but it is still full of components that can be used as spare parts for aircraft still in flight.

All it takes is the facilities, tools and know-how to turn grounded scrap into a profitable parts inventory. Tarmac Aerosave, based opposite Tarbes Lourdes airport in the Hautes-Pyrénées, is a consortium owned by the aircraft manufacturer Airbus, Safran, a high-tech manufacturer for aerospace and aircraft engines, and Suez, specialized in waste management.

It is the world leader in aircraft and engine recycling.

When a plane reaches the end of its life, it takes off for Tarbes where specialized teams get to work.

They start with the soft elements – seats, carpets and other fittings and accessories – and gradually reduce the fuselage to a hull. The engines, for their part, benefit from special treatment in a hangar reserved for precision dismantling.

The last step is to cut the plane into pieces using a special diamond saw to recover the steel and aluminum.

Every part – from the seats to the black box – is sorted and stored ready for resale. What cannot be reused is sent for recycling. Windows, for example, are transformed into fleece jackets.

The entire process, from the aircraft’s final landing to the recycling bin, can take as little as two weeks, depending on the size of the aircraft. Almost 300 aircraft have been treated in this way over the past 14 years.

Tarmac Aerosave CEO Patrick Lecer said: “We reuse around 60% of the components, all carefully checked by engineers.

“In total, we can recycle 90% of an aircraft. One day we hope it will be 100%. Currently, only carbon, foam and certain types of plastic cannot be recycled.

This is just one of the activities of Tarmac Aerosave: it provides another service to airlines, which made perfect sense during the pandemic.

Last year, air transport practically came to a halt. The sudden drop in flights has forced around 5,000 passenger planes to be taken out of service and stored indefinitely.

In addition to Tarbes Lourdes, there is a large long-term storage area in Teruel, Spain, where the same dry mountain air that is used for drying hams helps reduce paint and metal deterioration.

The other two sites are in Toulouse and Vatry, in north-eastern France.

In total, the company can store 280 planes, from the smallest short-range models to wide-bodied jets and double-decker Airbus 380s.

“Parking” is not the correct term, as a stationary aircraft needs constant monitoring and maintenance to maintain its safety certification. A large part of the time of Tarmac Aerosave employees is devoted to verifying the correct operation of each system on an aircraft.

On a more mundane level, every aircraft should be protected from damage from the elements and nesting birds.

Even without a pandemic, planes must be in storage for a variety of reasons, including transitioning from carrier to carrier or in reserve until seasonal demand gets them back into the air.

Recent events may have shaken the industry, but will air travel return to what it was before the pandemic, I asked Patrick Lecer?

“Yes,” he told me. “It may be a bit reduced but the demand is still there.

“I have spent my entire career in the industry and it has doubled in size every 15 years or so.

“Maybe from now on, its size will only double every 20 years.”

The French citizen body for the climate explained

In Juvigny Val d’Andaine, the post office and the French service area reopened…