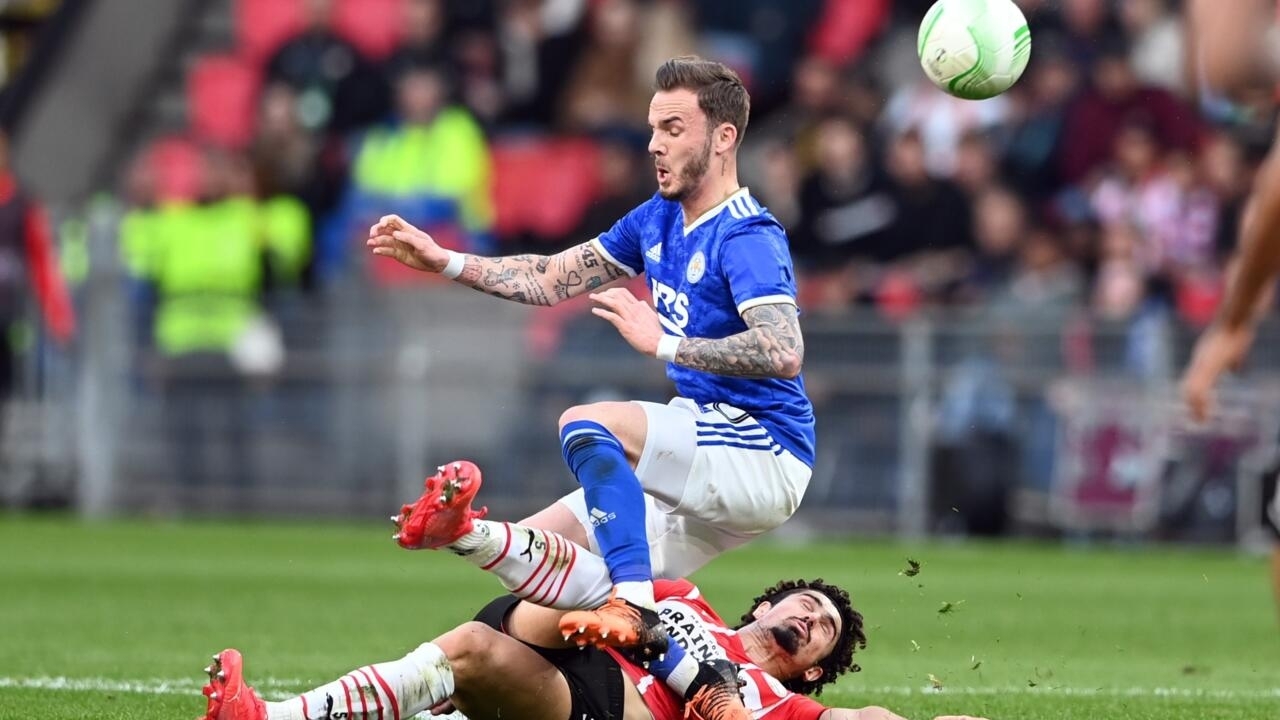 Paris (AFP)- Leicester beat PSV Eindhoven 2-1 on Thursday in the Europa Conference League to reach a European semi-final for the first time in their history, where they will face Jose Mourinho’s Roma.

After a goalless draw in the first leg in England last week, PSV took the lead in the quarter-finals through Eran Zahavi.

But late goals from James Maddison and Ricardo Pereira dispatched Brendan Rodgers’ Premier League side and stunned the crowd at Philips Stadion.

Leicester will face Roma for a place in the final in Tirana on May 25, after the Serie A side overturned a 2-1 first-leg deficit against Norway’s Bodo/Glimt with a 4-0 thrashing.

“We are such a young team in European football,” Leicester manager Rodgers told BT Sport.

“PSV have an amazing history in Europe and for us we’re so young – these are great experiences for us and I’m so happy for the players.”

The first real chance of the match went to PSV’s Mario Goetze in the 13th minute, but the German’s volley was prevented by a magnificent one-handed save from Kasper Schmeichel.

Leicester should have taken the lead minutes later as Harvey Barnes ran clear on goal, but the England winger slipped his effort terribly far from the far post.

Schmeichel had to be alert again in the 25th minute to deflect Mauro Junior’s low shot, but PSV took the lead soon after.

Goetze intercepted Youri Tielemans’ loose pass just outside Leicester’s penalty area, before laying the ball open for Zahavi to drill in a fine shot into the bottom corner.

The visitors pushed on in the second half but had to wait until the 77th minute to equalise.

Substitute Ayoze Perez brilliantly managed to reach the goal line and bring the ball back to Maddison, who chose the roof of the net to score for the 14th time this season.

A PSV fan threw a cup at the celebrating Leicester players, before a two-minute delay.

The Foxes completed their comeback with just two minutes of regulation time remaining, as Pereira pounced on a rebound after Patson Daka’s shot was saved.

Nicolo Zaniolo netted a brilliant hat-trick as Roma edged past Bodo/Glimt at the Stadio Olimpico to win 5-2 on aggregate.

It was revenge for the capital club after an embarrassing 6-1 thrashing of Bodo/Glimt in the group stage and defeat last week in a moody clash.

England striker Tammy Abraham gave Roma the perfect start with his 24th goal of the season in the fifth minute.

Zaniolo scored three excellent finishes with his left foot, all of which came at the end of quick moves from the home side.

Marseille also booked their place in the last four as Dimitri Payet scored for the second time in the encounter – a 1-0 victory over PAOK in Greece sealing a 3-1 aggregate success.

Marseille may have to play the first leg of their semi-final behind closed doors after UEFA opened an investigation into the violence ahead of last week’s first leg.

The Ligue 1 club will face Feyenoord in the semi-finals, following the Dutch side’s 3-1 victory over Slavia Prague in the Czech capital after a 3-3 first-leg draw, with two goals from Cyriel Dessers.