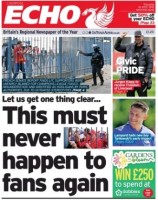 A regional daily has vowed to keep fighting for answers about the chaos at a French football stadium falsely blamed on football fans in its patch.

The Echo of Liverpool spoke after a report from the French Senate in the events surrounding the Champions League final in Paris felt it was unfair that the authorities “sought to blame Liverpool supporters”.

The match between Liverpool FC and Real Madrid on May 28 was marred by several organizational failures on the part of European football’s governing body, UEFA, and the French authorities.

A number of supporters then turned up at the Echo to detail the ‘horrible experiences’ of the match – including being gassed by police, being refused entry to the stadium despite valid tickets, and being attacked and robbed by residents.

L’Echo splashed the findings of the French Senate on Thursday and issued the warning: “Let’s get this straight…this must never happen to the fans again.”

In an accompanying editorialtrainee journalist Patrick Edrich wrote: “A horribly dated view of the French authorities has led to fans being bottled up, run over, tear gassed, abused and ignored.

“It was only thanks to the exemplary behavior of Liverpool supporters who were subjected to extreme provocations by the police that the result was not worse than it was.

“And because of that, serious questions have to be asked about the capacity of the stadium and the city of Paris to host events of this magnitude.

“Since the Champions League final, the police at the stadium have been tripled.

“It can only be a good thing, but it shows again how unprepared the stadium was to host the game.”

The report said the fans caught up in the crush had been “misunderstood” and identified by French authorities as “hooligans, sending them back to 1980s stereotypes”.

Patrick added: “An independent study by UEFA was launched last month to examine the planning of the governing body for the showpiece final.

“Points that need to be addressed will no doubt relate to the structure of the ticket office, the problems with reading barcodes, the role of stewards and the role of the police.

“But above all, we hope that UEFA will take some responsibility for their part in this fiasco and not play the blame game.

“The Senate report brought the truth to light. But that should not prevent it from being the center of our attention.

“Instead, it should make us hungrier for answers about why it was allowed.”