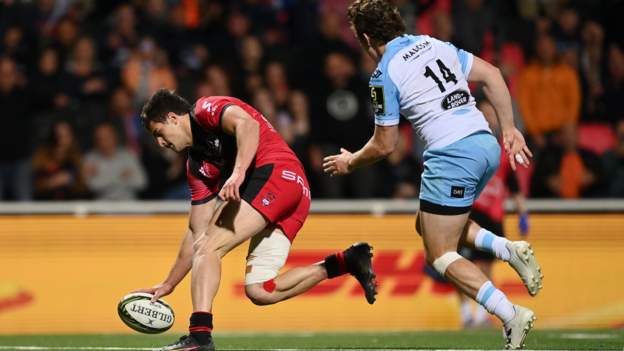 Glasgow Warriors missed out on a first European semi-final after Lyon fought back to win the Challenge Cup.

The Warriors led 20-13 at the break, with Josh McKay and Cole Forbes crossing and Baptiste Couilloud getting the hosts’ first down.

A penalty try followed for Glasgow in the second half, but Lyon responded with Romain Taofifenua and Davit Niniashvilli over the top.

Niniashvilli’s second helped Lyon to a 35-27 victory and a semi-final with Wasps.

The Wasps will be home for next weekend’s game.

Leo Berdeu’s early penalty gave Lyon the first points and Forbes’ interception prevented the French side from getting the first try in the stages.

The Warriors turned the tables when McKay hooked his own kick to land after Toby Arnold failed to recover. Ross Thompson converted.

Handling errors cost Lyon again when Dylan Cretin spat the ball away at the crucial moment, but Berdeu quickly brought the hosts within a point with his second penalty.

A mistake by the Lyon defense allows Ali Price to score what he thinks is a try. TMO, however, ruled that the Scottish scrum-half failed to get the required down pressure on the ball as he was tackled by Couilloud.

Two penalties from Thompson took the Warriors’ lead to seven and there was more frustration for Lyon when Felix Lambey’s choking on Zander Fagerson meant Beka Saginadze’s touchdown didn’t count.

However, Couilloud was not deprived of a tap and go from five meters following an infringement by Glasgow. Berdeu converted.

Glasgow wanted a lead at the break and they got one, moving the ball right to left and McKay offloading Forbes into the game. Thompson converted.

The Warriors started strong in the second half and referee Matthew Carley’s patience was exhausted when Berdeu entered beside a maul and was shown a yellow card.

However, Jamie Bhatti was convicted for the same offense in a Lyon attack and the hosts kept the pressure on with Taofifenua forcing his way. Jean-Marc Doussain converted, after replacing Couilloud as scrum-half.

Pierre-Louis Barassi then unloaded for Niniashvilli on the left to run into the corner and Lyon were within two points. Berdeu was back and his conversion attempt was wide.

His next kick, a penalty, was successful and another quick try from Niniashvilli took the game beyond Glasgow after Berdeu added the conversion.

Berdeu missed a late penalty but it was unimportant.