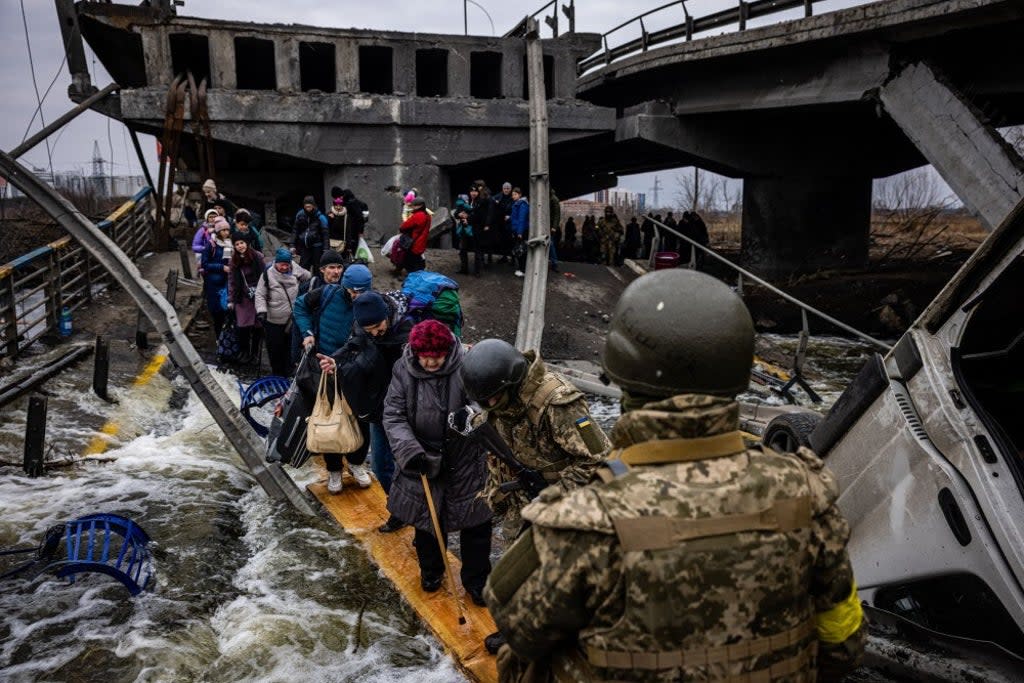 The West – the world in fact – has a choice: either it can watch and do nothing while civilians (including children and entire families) are shot and shelled as they try to escape the bombardment of their houses… or what, exactly?

When you’re up against an enemy as cruel, cowardly, incompetent, and murderous as Vladimir Putin and his army, it’s hard to pinpoint exactly what would stop the slaughter right now. We should wage an economic war and make it more intense and akin to a blockade, but it takes time to be effective.

Our limited military assistance is crucial – but is also precisely that: limited. The public can see that internationally monitored safe humanitarian corridors would certainly save lives, almost immediately; but the West does not have the courage to enforce them. The same goes for no-fly zones that would end the war almost quickly, but there’s even less appetite for those.

There are strong arguments against such bold demands – they risk proving the Russian argument that Ukraine is a Western Nazi puppet; we would risk escalating into World War III; and American, French, German, Polish and British forces could suffer casualties. Public opinion would not like that; and yet public opinion is surely more and more moved by what it sees, and by the obstinacy and cruelty of the Russians. As in the former Yugoslavia and Iraq, the pressure on politicians will become unbearable. “Something must be done” is a powerful call.

In truth, we must know that sooner or later we will have to face the Russians. In the short term, this would surprise and confuse the Kremlin. We are even moving there now.

The Poles and others are offering planes to the Ukrainians, but the Russians insist this is an act of war. The West is imposing sanctions on Russia and Putin’s cronies, and that for Moscow is an act of war. Nuclear alert levels are raised by Moscow. When he settles in Moldova, will we do nothing more than impose more sanctions because it is not in NATO?

When he moves to Estonia, will we abandon him because although he is in NATO, we cannot risk a nuclear war with Russia? Where does our fear of Russia leave us? At the mercy of Putin. In due course he will tell us that he will use nuclear weapons until we stop “threatening” Russia by having British and French troops in Estonia, and the Americans are told to withdraw their missiles from Romania. So what do we do?

“Our hearts are going out,” as the cliché goes, but not our soldiers or jet fighters, it seems. We want humanitarian corridors, and the Russians have kindly put them in place – so they can use the elderly and children as training targets. Their craziest joke is Putin’s offer of escape corridors to Russia and its ally Belarus. Imagine your children and grandchildren being murdered by the Russians and then offering to take you to safety?

When confronted face to face with Ukrainian troops – and even civilians – the Russians are surprised by their resistance and bravery. So they fall back on the methods of medieval siege, bombarding and cutting people off from running water, electricity, food, medicine and fuel and starving them into submission.

If that doesn’t work, then the cities of Ukraine will be razed to the ground, as Aleppo and Grozny were before them. It is not impossible that the Russians use chemical weapons or even “battlefield” nuclear weapons, even though they have killed Russians as well as Ukrainians. Along with lives, Ukrainian art, cultural treasures, architecture and way of life will be reduced to dust. Only the bitterest enmities will emerge from this dust.

We can see for ourselves the truth about Putin’s war machine. Thanks to smartphones, dash cams, CCTV and the efforts of brave journalists such as Stuart Ramsay and his team at Sky News, themselves recently ambushed, we can see how Russia is proposing to “free” the Ukrainians of militarism and Nazism.

To keep up to date with all the latest opinions and comments, sign up for our free weekly Voices Dispatches newsletter. click here

The Russians claim not to shoot at civilians and that they only cause casualties as collateral damage; the reality is closer that they only fire at defenseless civilian targets because their attacks on the Ukrainian army have been so ineffective. The only weapon of war they know how to use is mass terror.

If we put up some resistance to Putin, “escalation,” you can call it, and send our own ultimatas about killing civilians; then we will test his composure because he has never been tested. If he wants to make war a legitimate means of settling international disputes, look how he likes it.

NATO is stronger than Putin and its soldiers know it. We need to show the kind of resolve that Jack Kennedy made in the Cuban Missile Crisis, or a Ronald Reagan in the closing stages of the Cold War. Or we can continue to send our hearts to the dead.

Evacuation routes will be set up in 4 Ukrainian cities