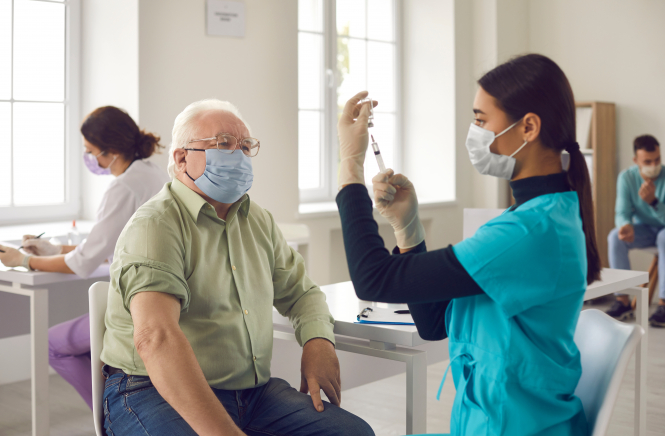 The third dose of the Covid vaccination is vital and in the future we may need new vaccinations, Jean-François Delfraissy, president of the official government advisory body on the Covid.

He said there are limitations to the messenger RNA vaccination used by both Pfizer and Moderna because “we have seen that they lose effectiveness over time. We need new second and third generation vaccines.

He added that after two doses of an RNA vaccine your immunity to severe cases of Covid is between 70 and 80% but this drops to 30% after five to six months hence the importance to have a booster dose. Likewise, he said he could not rule out at this stage the need for a fourth dose (or more) in the future.

Mr. Delfraissy, head of the Scientific Council, was questioned by the Senate’s Social Affairs Committee on the speed of the fifth wave which continues to hit France.

He said he was opposed to the third dose being sent to developing countries: “It is scientific heresy. I totally disagree with the WHO [World Health Organization] on this topic. This is a political and not a health point of view.

He says if we don’t want to lose the benefits of the vaccination program so far, there must be a third dose in the north [hemisphere] countries.

“We have a significant number of 80-year-olds, 300,000 or 400,000 who are not vaccinated. We must continue to approach them to try to convince this elderly population that with the arrival of the new variant there is an additional argument for them to be vaccinated.

The Scientific Council, he said, was also sending a “very strong message” to health workers to take the third dose and that the means to do so be put in place.

Currently only 30% [of the health workers] received the third dose, and that it was not enough: “they have to protect themselves, protect the patients they care for and protect the families”.

He agreed that a third dose did not entirely prevent someone from contracting the virus, but it did significantly lower the risk. He says this has been demonstrated by Israel’s statistics.

In response to a question about the need for a fourth dose, Mr Delfraissy said it was a possibility, although at this time he said we don’t know how long the third dose will remain. effective, so it is impossible to know when and if it might be needed.

On vaccinations for children aged 5 to 11, he said that if approved, the Scientific Council would not want them to be compulsory or part of a health pass for children because that would be “the best way to scare people away. but they would recommend it.

The health authority, La Haute Autorité de Santé, will make its recommendation within the next ten days, he said. French scientists are waiting to receive the results from the United States where the vaccination program for 5-11 year olds began three weeks ago.

In schools, he said there could be systematic testing from January, which the Scientific Council, he said, had already been in favor of since September, but that was for the government to decide.

However, he said “this crisis will not be solved by vaccination alone” and that health barriers are very important.

Timeline: When do France’s new Covid rules to fight the fifth wave start?

Covid: How will Christmas be in France? That’s what the experts say

How can I use Covidliste to find a vaccination appointment in France?